You are here: Home » Adventure » The Seven Carries – A Classic Adirondack Paddle

What to do on a rainy, early summer Sunday? Take the boats out, of course. We’ve been in hiking and trail running mode, which means our boats haven’t seen much time in the water yet this year. But hiking in the rain can be a miserable experience. So a few weeks ago, motivated by a bleak forecast and a strong urge to get outside regardless of the weather, we decided to explore the St. Regis Canoe Area for the first time. That’s the great thing about paddling – rainy weather doesn’t compromise the views and you’re likely to get wet anyway, so what’s the big deal about a little rain?

The St. Regis Canoe Area is a pretty cool place, it turns out. It’s 19,000 acres of wild, motor-free lakes and ponds. It’s the largest wilderness canoe area in the Northeast and the only designated canoe area in New York state. We had a day to explore, so we decided to paddle the classic Seven Carries route, which connects seven ponds via several short portages.

The route starts (or ends) at Lower St. Regis Lake at Paul Smith’s College and ends (or starts) at Little Clear Pond. Since it’s end-to-end, rather than a loop, this route requires a car plant. Though you can paddle it in either direction, our preference was to end the trip with the wilder, quieter ponds.

The rain held off as we prepared to put in at the Paul Smith’s launch. Dave and our friend Jan were stylin’ in their 16 lb. Kevlar Hornbecks. I, however, am not a light packer and prefer my 44 lb kayak.

The paddle begins with an open-water traverse due south across Lower St. Regis Lake…

Which will take you to a winding inlet that leads up to Spitfire Lake. This narrow, boggy waterway is awesome for getting up close and personal with the flora and fauna. Who can resist a perfect yellow water lily? 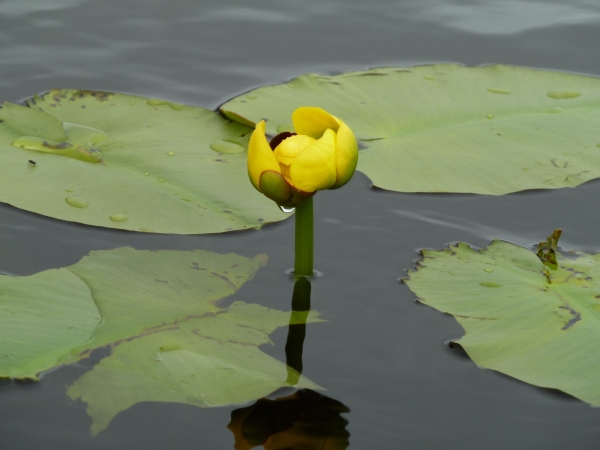 Once on Spitfire Lake, stay left along the eastern shore of the lake. Several camps and boathouses line the shore. It was a quiet day and still early season for the summer folks, so I didn’t feel like too much of a voyeur as I paddled by and tried to get a good look at each of the properties. 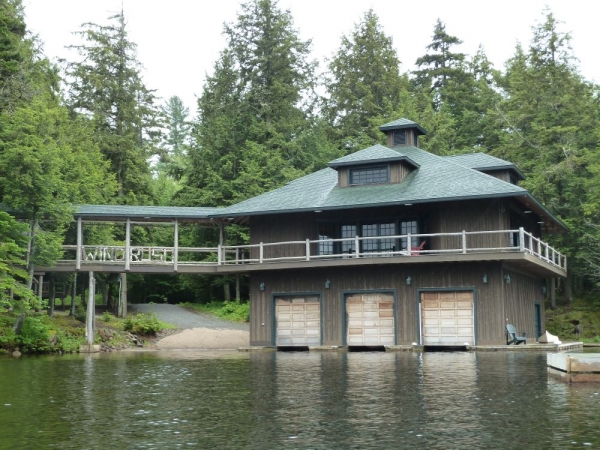 We passed Rabbit Island and cruised up to get a closer look at the plaque on its shore. Who knew this trip would be so educational? 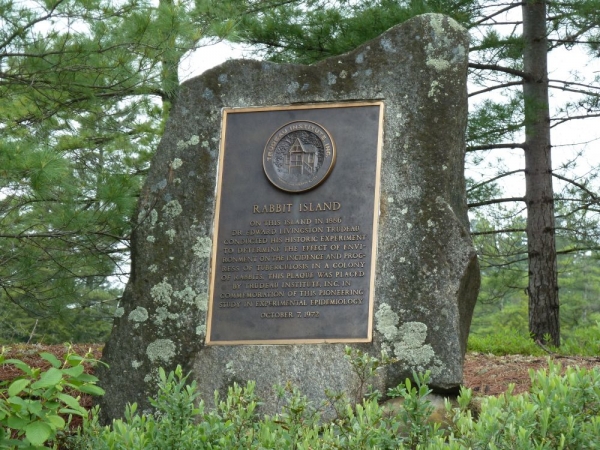 Rabbit Island is where Dr. Trudeau, of the famous Trudeau Institute in Saranac Lake, first experimented with rabbits and Tuberculosis. These experiments led to Saranac Lake becoming a center of health and wellness in the early 1900s.

After Rabbit Island, another narrow waterway leads up to Upper St. Regis Lake and the first portage, which leaves from the southern most bay of the lake. 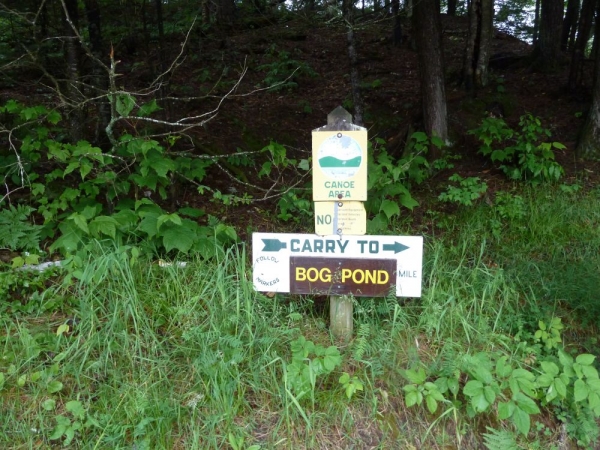 The first portage is short and sweet – about 150 feet – and leads to an adorable little pond called Bog Pond. Bog Pond is TINY, but beautiful. And apparently it’s a botanist’s delight, with specimens such as the carnivorous Pitcher Plant and Sundews. I am decidedly not a botanist, but that didn’t stop me from oohing and ahhing over the pretty flowers.

It took us all of 3 minutes to cross Bog Pond to the second carry, which leads to Bear Pond and the official beginning of the St. Regis Canoe Area. By now it was raining steadily, so the short 150 foot carry through the mud was quite nice. Though bigger than Bog Pond, Bear Pond is by no means large. It’s a quick paddle to the next carry, which leads .25 miles to Little Long Pond. 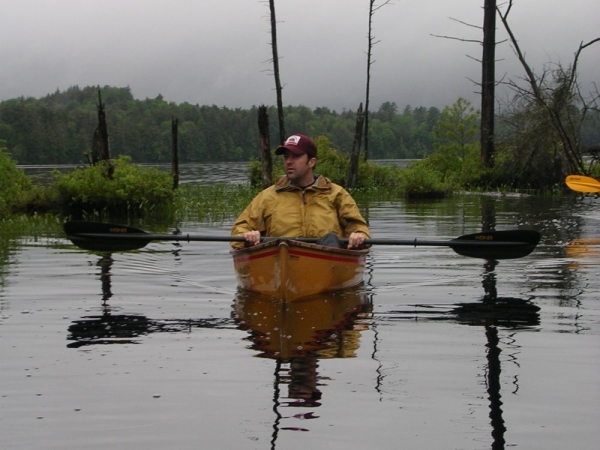 Throughout the day we were lucky to see and hear many, many loons. Though it ended up being a camera-killer, Dave caught this lovely shot of a loon in the rain. 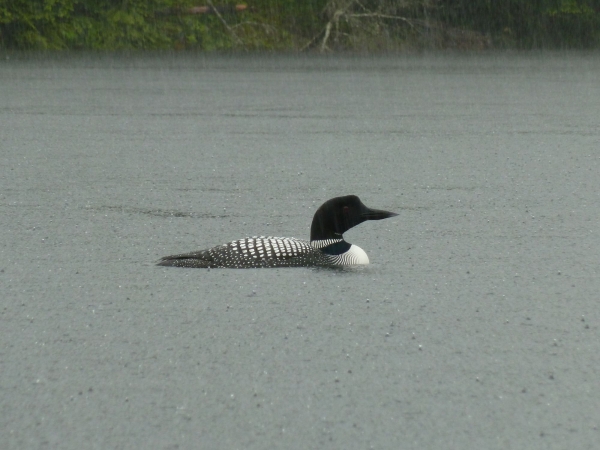 Several times we stopped paddling to quietly drift and listen to the loons bark and call and wail to one another. It’s a sound that never gets old.

The next portage takes you from Little Long Pond to Green Pond (.25 miles), and the next carry from Green Pond to St. Regis Pond (100 ft). St. Regis Pond is, arguably, the nicest along the route. It’s simply gorgeous and has several beautiful campsites. We’re looking forward to spending a few days there later on in the summer. 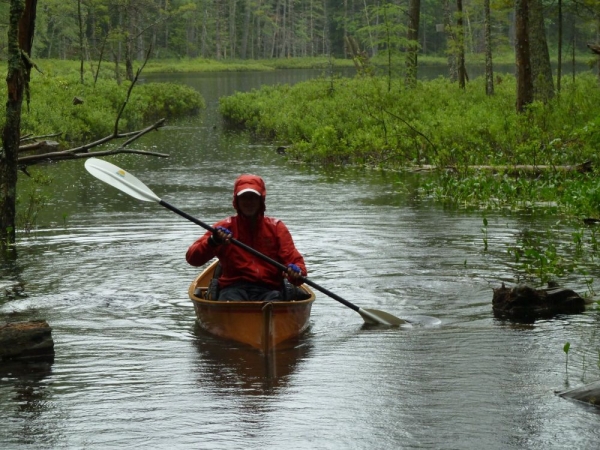 The last carry of the day to Little Clear Pond starts from a little inlet on the southeastern most bay of St. Regis Pond. This is the longest carry by far (.6 miles), but is still a very manageable portage. On this day, unfortunately, the mosquitoes happened to be particularly murderous. We hiked as quickly as we could and all but threw our boats into Little Clear Pond. We paddled furiously away from the shore, screaming, “THE F&%$#@! ARE STILL FOLLOWING ME!” Or maybe I was the only one screaming. Either way, it’s funny in retrospect.

Here’s the view from shore, looking back across Little Clear Pond. 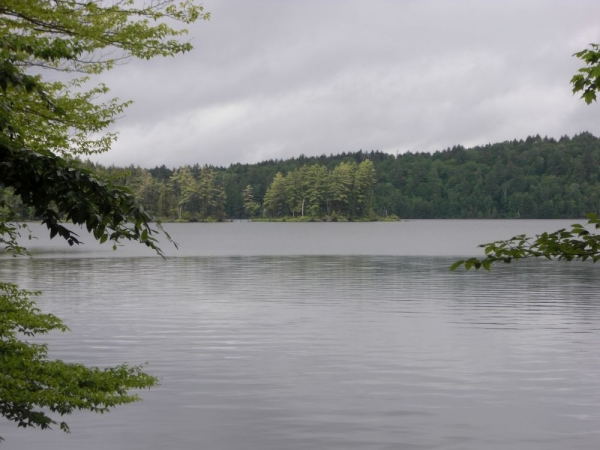 The Seven Carries is a relaxed day trip that covers about 9 miles end-to-end (about 6 hours paddling, give or take). Had the weather been nicer and the bugs less blood-thirsty, we would have stopped to swim and explore each of the ponds a bit more thoroughly. All said, this was the perfect introduction to the St. Regis Canoe Area and we cannot wait to go back.

Necky Manitou Sport Kayak: How to look good on top of a car